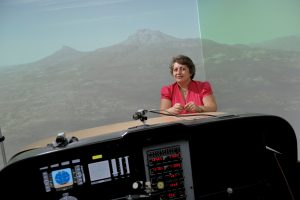 W. Grafton and Lillian B. Wilkins Professor
Department of Mechanical Science and Engineering
University of Illinois at Urbana-ChampaignÂ

My TEDxYerevan talk can be viewed here.Â The pdf file of the actual script is here.

The New York Times article can be downloaded here.

The Aviation Week article on Learjet flights can be downloaded here.

The Advanced Controls Research Lab spent two weeks at the Edwards AFB in Southern California to support flight testing of a Learjet augmented with an L1 adaptive flight control law. It was the first time an L1 adaptive system was tested in flight on a manned aircraft, and it represents an important step towards the introduction of this technology into commercial aviation. The goal of this collaboration was to build trust in L1 adaptive control and provide evidence for certification of this technology. 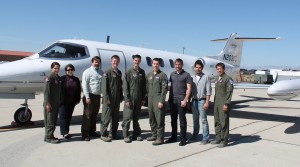 Testing consisted of one week of ground checks, followed by two weeks of extensive flight testing, with 2 deployments per day, and 1.9 hours of uninterrupted flight per deployment. In-flight testing primarily focused on handling-qualities assessment for various tasks, including capture and offset-to-landing tasks, as well as on analysis of the robustness margins of the L1 controller in terms of gain and time-delay margins. The main objective of the study was to investigate the ability of L1 adaptive control to maintain nominal aircraft handling qualities and prevent unfavorable aircraft-pilot interactions in the presence of aircraft failures (changes in the aerodynamics, loss of control effectiveness, coupling between control channels, shifts in the center of gravity, etc).

Testing was led by the USAF Test Pilot School (TPS), and used Calspanâs variable stability Learjet. This aircraft implements a variable stability system (VSS) that is able to emulate changes in aircraft aerodynamics through the use of feedback loops, which are opaque to the flight control law. A total of 16 VSS configurations were tested, with various severity levels per configuration. The tests were performed by F-16 and B-52 pilots. The ACRL closely collaborated with Calspan to implement the L1 control law on the aircraft computers, and with the TPS to define the flight test plan.

These flight tests were a natural continuation of the tests performed by NASA Langley on the AirSTAR dynamically scaled Generic Transport Model research aircraft during 2009-2011 and the piloted simulation evaluations conducted by TUDelft on the SIMONA motion-based research simulator in 2011.