Researchers at the University of Illinois are working on robots that could bring your medicine to you in your home. A $1.5 million grant is helping cover the costs. Engineers already have working prototypes in their lab.
In the next 15 years, the elderly population is expected to double. Researchers say all those people are going to need extra help to avoid overcrowding nursing homes and assisted living centers. Their project is just one of many technological advancements on the horizon.
â¦
âYou get a medicine reminder on your iPhone, you can push a button,â said Naira Hovakimyan, who is a professor of Mechanical Science and Engineering. âA small drone can fly, get the medicine, bring it and deliver it to you.â
âIf you talk today to your grandparents, they may be scared of a drone flying at home, doing certain tasks,â said Hovakimyan. âBut if Iâm today developing the technology, Iâm growing with it. By 2030, Iâm the one over 65 who will need it so I wonât be scared, most likely.â

Check out the TV show video at: illinoishomepage.net

My Statesman (Dec 31st 2015) Herman: Predictions for the new year

Hovakimyan talks about drones with glee, but she knows that everyone isnât as friendly with robots as she is. Thatâs why sheâs not only working to create functional drones, but make them friendly enough so they can soon be a part of our daily lives. âToday grandmothers are afraid of the drones,â she said to Chicago Inno in August. âI wonât be scared of those in 2030.â

The UIUC mechanical science and engineering professor got a $1.5 million National Science Foundation grant this summer to fund the development of robots that can assist the elderly with daily tasks, in a project called Automation Supporting Prolonged Independent Residence for the Elderly, or ASPIRE. These robot drones could deliver pills from the cabinet or help with cleaning. She received an additional $300,000 grant to lay the groundwork for Non-Intrusive, Collaborative, Empathetic, Robust (NICER) robots, with an aim to understand peoplesâ perception of robots.

Star Daily Standard Times (Dec 6th 2015) Will the aged quickly have DRONES to take care of them? $1.5m undertaking will create âBibbidi Bobbidi Botsâ to assist across the residence

Will the elderly soon have DRONES to look after them? $1.5m project will create âBibbidi Bobbidi Botsâ to help around the home â¦
â¦ A roboticist from the University of Illinois was recently awarded a $1.5 million grant from the National Science Foundation, which she will be using to design drones that can help around the house.
According to , Naira Hovakimyan is putting small drones to work and testing how they can perform common tasks, like retrieving a medicine bottle from a different room.
Her drones may seem like the fairy-godmother of the elderly, and they should â Hovakimyan refers to them as âBibbidi Bobbidi Bots.â
The world is moving more toward automation every day, and she says that drones could be a regular part of the elder care system in a decade or two.
âI think that it will take another 15-20 years to integrate such technology in our lives at affordable prices,â Hovakimyan told Dailymail in an email.

The Daily Mail (Dec 4th 2015) Will the elderly soon have DRONES to look after them? $1.5m project will create âBibbidi Bobbidi Botsâ to help around the home

A roboticist from the University of Illinois was recently awarded a $1.5 million grant from the National Science Foundation, which she will be using to design drones that can help around the house.
According to The New York Times, Naira Hovakimyan is putting small drones to work and testing how they can perform common tasks, like retrieving a medicine bottle from a different room.
Her drones may seem like the fairy-godmother of the elderly, and they should â Hovakimyan refers to them as âBibbidi Bobbidi Bots.â

Read more at: The Daily Mail

In her lab, Dr. Hovakimyan has begun experimenting with small and large drones.

She refers to them as âBibbidi Bobbidi Bots,â borrowing a phrase from the âCinderellaâ movie, to make them seem less intimidating. Last month, in the Nicer Robotics laboratory at the University of Illinois, researchers began experimenting with an Oculus Rift virtual reality viewer to show people how it might feel to be close to a small drone. She believes that drones could ultimately be used to perform all manner of household chores, like reaching under a table to grab an object, cleaning chandeliers and weeding the lawn.

Press Examiner (Jun 10th 2015 ) Good News For Travelers: Transportation Innovations Are Only Getting Better
â Another important breakthrough has also recently been discovered by researchers at the University of Illinois in Urbana-Champaign. The article, published on the Universityâs news site last March, states how the implications of this discovery are dramatic to airplane and aircraft safety.

Naira Hovakimyan, a professor at the university, announces her teamâs highly successful test of the Hovakimyanâs L1 adaptive control technology on a manned army aircraft, which should be an important step towards the technologyâs introduction into commercial aviation.

Hovakimyan is hopeful that this will create a dramatic improvement in flight safety for aircrafts equipped with her teamâs technology, and weâre certainly looking forward to it.â

ECN Magazine (May 18th 2015) Illinois Professor has emerged as leading voice in flight control safety
âNaira Hovakimyan has a background as a mathematician, which dates back to humble beginnings in Armenia. Over the last 17 years, however, researchers in the United States have tapped Hovakimyanâs calculations to help advance work in the stability of flight control systems. In March, her research groupâs L1 control method was successfully tested in a Learjet plane at Edwards Air Force Base in California.â

Dr. Hovakimyan was interviewed by the 6pm news on April 9th. They discussed how the technology developed at ACRL can make flying safer.

âCommercial air travel safety could see significant improvements thanks to a breakthrough in aircraft flight control technology from researchers at the University of Illinois at Urbana-Champaign.â
Read more at: phys.org

âAfter just two days of testing above 10,000 ft., the evaluation team deemed the system safe for low-altitude flight, and executed a total of eight touch-and-go landings with the L1 controller engaged, with and without injected aircraft failures.â
Read more at:Eurek Alert!

Inside Edwards (Air Force Base; March 11)

âOne of the things that makes this particular controller special is that itâs predictable and the results are repeatable. The flight crew is able to determine how much error the controller can handle before take-off.â
Read more at: Inside Edwards

âAll of these flight tests serve as in-flight validation of the underlying mathematical theory, which provides guaranteed, consistent, and uniform performance, regardless of the nature of the failure configuration. â¦The implications for both airplane safety and new aircraft R&D are dramatic.â
Read more at: Product Design & Development

âHovakimyanâs L1 flight control system is said to be the only one selected by pilots for stall and post-stall flight conditions.â
Read more at: Aerospace-Technology.com

Students at the Test Pilot School test an L1 Adaptive Controller as part of their Test Management Project. Read the full story here.

Dr. Hovakimyan was interviewed by the Big Ten Network on her research and the Humboldt Research Award. Read the full story here.

Dr. Hovakimyan was interviewed by a reporter of WAND TV after her presentation at the 2014 Precision Aerial in Progress City, IL on July 10, 2014. 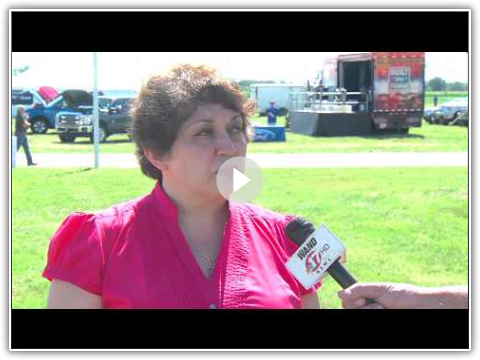 Dr. Hovakimyan was interviewed by the UIUC News Bureau regarding her prestigious Humboldt Research Award. Read the full story here.

A team of Illinois researchers (Dr. Alex Kirlik, Dr. Lui Sha, Dr. Naira Hovakimyan and Dr. Carolyn Beck) and Dr. Xiaofeng Wang of University of South Carolina, received a $950,000 National Science Foundation (NSF) grant to study cyber-physical-human systems to further investigate how humans need to be added to the equation of automation for many aspects of our lives. More details can be found at the Department of Computer Science news page: Cyber-Physical-Human Systems: Making the Whole Greater Than the Sum of Its Parts

L1 Control Theory in the media: